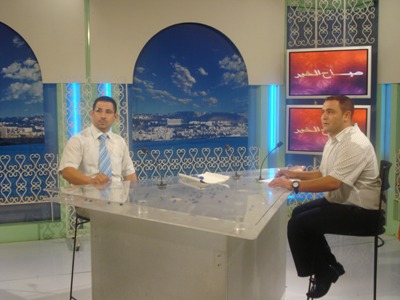 On Monday the 30th of June, at 8am, and for the second time, the Algerian telecasting hosted trainer Salaheddin Djilah in ” Good Morning” show; this show is considered one of the top shows at the Algerian telecasting broadcasted on both the terrestrial and satellite channels.
The meeting focused on Human Development issues and courses.
There was a harmony between the host and the guest, where Mr. Hasan revealed very good knowledge concerning Human Development and being enthusiastic about NLP
The trainer simplified the NLP in a beautiful manner, clarifying that programming has a space for positive social life.
One of the important cores presented by the trainer in the meeting was that he explained the concept of failing at baccalaureate. Therefore, he presented a diagram about how to face it and make it a step on the road to success.