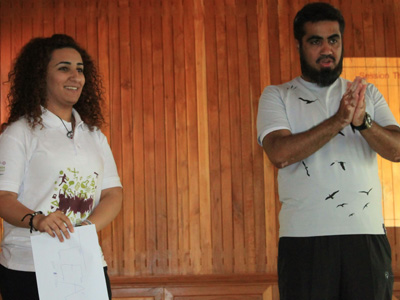 In a youth atmospheres that are full with fun and enthusiastic the certified trainer Hussain Habib Al-Sayed provided "team building" course for a group of leaders of youth work volunteer workers in innovative youth projects aimed at community service.

Where these leaders working within Reach Out To Asia ROTA, a non-governmental organization fall under the umbrella of the Qatar Foundation since 1995, and chaired by Her Highness Sheikha Moza bint Nasser.

The Qatar Foundation has a key principle is that the human is most important resources. The Foundation aims to develop this capability on a global level through a network of centers that are committed to making progress in the levels of education, research and community welfare.

Also participated in this training course a group of youth leaders - of both sexes - who work in the social and cultural projects that benefit Qatar primarily and the overall region as a whole.

Course was held in the city of Ruwais that away from the capital for more than 100 km in the upscale farm, which gave a special flavor to the course to remain in the memory of the audience with brotherly atmosphere and beautiful green landscapes. The trainer started the course by designing a kite and the challenge was to reach the kite to the fullest extent the matter that refers the trainee’s memory to childhood atmosphere. And an easily hard education resulting in quick breaking of the barriers between the audiences. 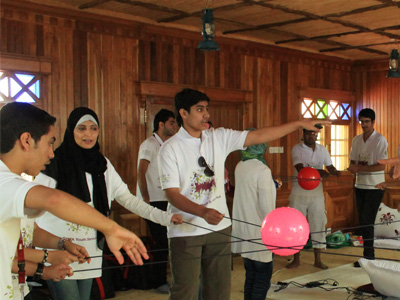 After an upscale dialogue about the most important experiences undergone by the leading young people through their volunteerism, everyone participated in the challenge which was lifting ball through the parallel ropes and that sparked a lot of discussion and competition between groups, and revealed the principle of team building that needs a lot of skills and trust and understanding.

Then the discussion moved toward the types of work teams and the advantages and disadvantages of each team and how to set up a successful team, especially if there is:

To learn TORI model and understand how to apply it, the trainees found themselves in a new challenge to design a stroller model through global training tools MTa which is considered one of the most important tools used in leadership training and team building and accredited by the United Kingdom.

And actually the participants were divided into groups with a leader that manages the groups and an observer who recorded the most positive and negative points with noting dialogues and discussions that take place in groups by course trainer Hussain Habib Al-Sayed...

At the end of the exercise the trainees began in-depth transparent analysis to find out what happened during, and what are the times in which there were differences in the team and to evaluate the role of each individual and the extent of his commitment to his duties required from him.

At the end of the course the trainees thanked the trainer for his efforts and emphasized that this course will be key to upscale deal in work teams and in converting the individual work to teamwork and scurrying to build a creative work teams.