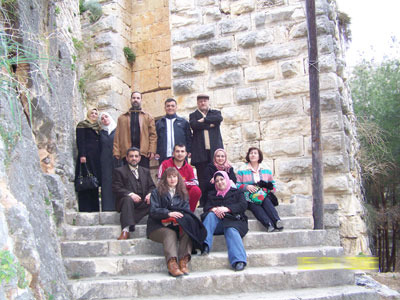 “It was one of the remarkable days in our lives” said the trainees who spent the day at Saladin Castle On Thursday 28/2/2008 parallel to the ILLAFTrain Certified Trainer Course in Slunfeh 23/2 – 6/3/2008.

This citadel is the biggest one in Syria. It's the largest one during the crusade era. It has constructions that belonged to a successive civilizations; the byzantine civilization came at first, in this citadel there are some crusade constructions and some Islamic ones such as the citadel mosque and a school for teaching Qur'an.

It's distinguished by a moat that's engraved totally in rocks where its length is 156m; 25m high and 14-20m width. It's also distinguished by a rocky pillar that once supported a bridge of entrance. It's build by the byzantine, then the crusaders came, at last it was liberated by Salah Aldin Alyuby in July 1188AD.

The trainees of ICT course made a tour through the whole citadel with the help of the tourist guide who told them about all its details, and how it took 500 years to be built.

The trainees took memorial photos of every part of it. They climbed the defense towers, they visited the water reservoirs, the mosque, and the bathrooms which is characterized by its wonderful architecture.

At the end of their tour, they went to the most amazing forest in the Syrian coast that surrounds the citadel; they enjoyed its spectacular nature.

This tour was more than great as shown in the memorial photos they took during this tour.