UAE - Dubai: The launch of EDUTRAPedia 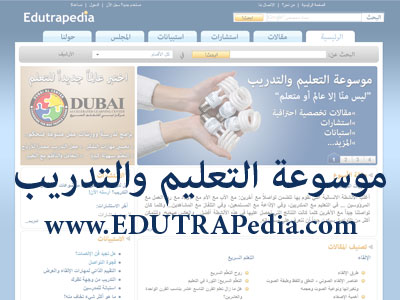 On the occasion of the thirteenth anniversary of establishing ILLAFTrain,and after considerable efforts and numerous meetings,the first version of "EDUTRAPedia" in Arabic language, the first of its kind, was launched on the 18th of April 2009, to be one of ILLAFTrain precious parts.
We asked Mr. Aladdin Mnalla Ahmad, the manager of ILLAFTrain development department, about the new project. He said: “praise the lord, this version of EDUTRAPedia was launched today, which aims primarily to provide a rich source of information. What is more, its different topics on education and training, in form of articles, researches, attached files, and questionnaires can be done directly via the website, where visitors get the results immediately. Besides, there's a section for consultations to inquire about education and training. Experts will answer members’ questions. Forums of professional trainers were launched nearly two months ago, and they are part of the EDUTRAPedia".
There is the following information in the site of the encyclopedia:
“We are either scholars or learners".
Nations evolve by their scientists and educated elite. Education, teachers, trainers, and everyone who works in education play a major role in spreading knowledge and establishing the upcoming generation.
ILLAFTrain team, administrators, or trainers have faith in:
·         The importance of ILLAFTrain role in serving the society from which it emerged.
·         The importance of decreasing “monopoly of specialized information", spreading it, and facilitating its access to all who seek for.
·         The importance of providing an electronic community that facilitates the meeting up of the specialists of learning and training all over the Arab world to discuss, exchange, and spread their knowledge.
The aim of establishing EDUTRAPedia is: “for providing the best and the most recent information concerning training and learning for everyone who is interested in the Arab world, in a simple and clear Arabic language.
The notion of ‘’Quality’’ and ‘’standard’’ play important roles in the articles, questionnaires, and the consultations of the encyclopedia, which is limited just to specialists.
Finally, we thank everyone participated in the completion of this work, including ILLAFTrain technical department.’’