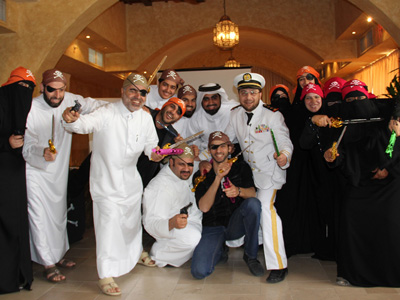 By virtue of Almighty God, the twenty fifth events of the Trainers Training Course have been completed at Doha Millennium in 22-02-2012. which lasted for 10 days and for 10 hours in each day… supervised by the following trainers: Doctor Mohammed Pedra, Jawaher Al-Mane’, Ghada Larum, 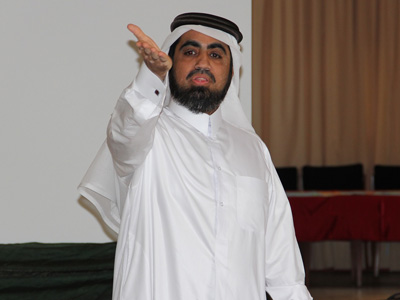 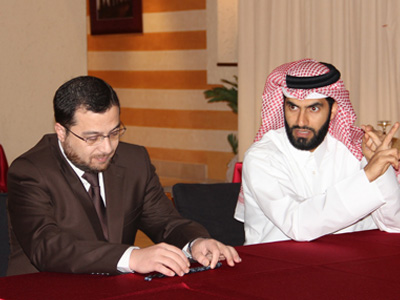 This course has been distinguished by breaking the records of the training rounds: for every trainee presented about fifteen training presentations in front of at least five referees… in which the trainees had got their “trip notes” in the first day before entering the forest. The hall were painted by the colors of a forest, therefore the green were all around, in addition to variety of forest animals and plants.

Here is something from what was done during the course:

The Introduction of Speeches: Forest framework 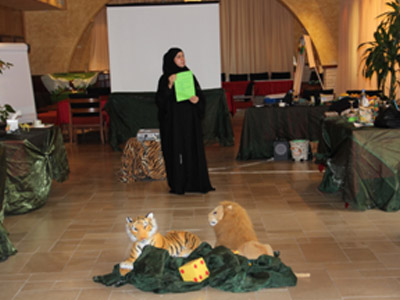 Then the trainer asked the groups to pick a subject from the course in order to try applying the stages of the introduction on the subject, then choosing a trainee from the group to do the presentation for everyone, and that’s how everyone reached the stages of speech introduction. The activity procedure is as the following:

Organizing the body of the speech: 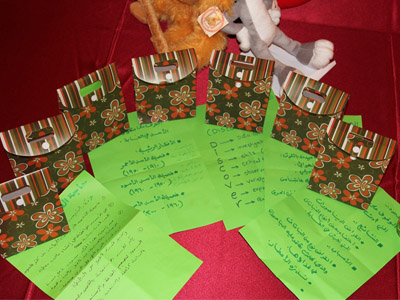 After revising the trainees with the components of the speech introduction, trainer Jawaher proposed a request from the king of the forest, in which the trainees need his help in dividing his speech subjects into main ideas, for he has 8 different subjects which their body needs framing. Then, the trainer distributed on each group bags containing paper written on it different parts of the body of the speech. Then the group must guess the type of the part. After that, the trainer explained the parts and then asked each group to explain the part to the next group and to nominate one of its members to present a body of a subject of his choice.

The following are the body of the speech organizing activity procedures:

The conclusion of a speech:

Trainer Jawaher Al-Mane’ began with presenting the speech conclusion for the trainees by acting the presentation of the certified trainer’s training course conclusion. Then she asked the trainees to guess 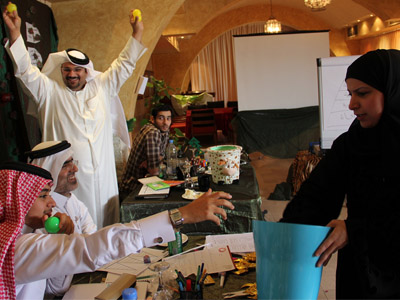 the conclusion components, after that, she went explaining the conclusion starting from summarizing the main ideas, going through  activating the audience response, and ending with giving an ending.

The trainer asked five trainees to choose 4 balls with the same color for each trainee from the basket then to throw them on 4 other trainees in the hall to make a group, and within the new group choosing an ending for one of the subjects should be agreed on and to act the concluding in order to present it in front of the other groups. With that the trainees could know the components of the conclusion during the exercise. The following are the procedures of the conclusion components activity:

The trainer presented a feedback to each group, and then presented the conclusion components to everyone. Choosing an ending for one of the subjects and acting a conclusion in order to present it in front of the groups.

The Guidelines for Building the Speaker Confidence:

Trainer Jawaher Al-Mane’ began presenting “building the speaker confidence guidelines” using the accelerated learning techniques, for she started with the story of the two monkeys (Positive and Negative) which goes on with the forest, the course characteristic, where she asked the trainees to look in the hall for the hanged monkeys that carry the negative phrases, and to find the proposed solutions from the wise and positive monkeys, as for the monkeys with sad faces points to the speaker problems during speaking, on the other hand, happy monkeys symbolize the appropriate solutions for these problems.

When everyone finished the search and pairing each problem with its solution, the trainer had divided the trainees into groups of pairs, and asked each pair to that person (A) play the role of the Negative Monkey that faces the speech obstacles in front of the audience, and trainee (B) to play the role of the wise Positive Monkey who has the instructions. With that, the trainees could know all the instructions for building the speaker confidence through the exercise, which was applied using one of the Accelerated Learning Techniques.

The following are the steps of “the instructions of building the speaker confidence” activity:

The Troopers Look for Cures for the Forest Diseases: 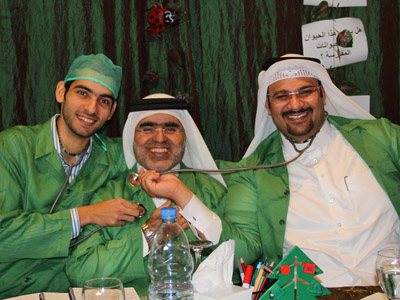 The Component of a Good Objective, and aiming the Balls towards the Goal:

Trainer Ghada Larum addressed the trainees with a request to write an objective of their own training objectives within their daily rounds, and to write it down on the balls exist behind the hall, which 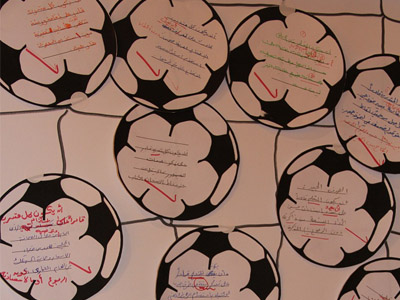 had been designed in the shape of football but a bad ones because they’re not filled with air, and they were distributed randomly out of the goal. Then the trainer explained to them that the reason of writing the objectives now on such a ball is that the objective doesn’t contains the components of a good objective which will be mentioned during the presentation.

In conclusion the trainer distributed another shape of balls, which are good ones filled with air, and asked them to rewrite the same objective they wrote before, but this time using the qualifications of the good objective that had been presented, then to the goal that is in the hall and fix it in it, because these balls contained the specifications of the good objective, therefore they will definitely score. That was one of the accelerated learning techniques in which the trainer role limited in simplifying and directing only, whereas the major role of searching and gaining knowledge goes to the student who is the core of the education process. The following is a detailed description for the activity process:

Photo Gallery: the components of the good objective.

The kitchen of “Bloom, Gang, and Kolb 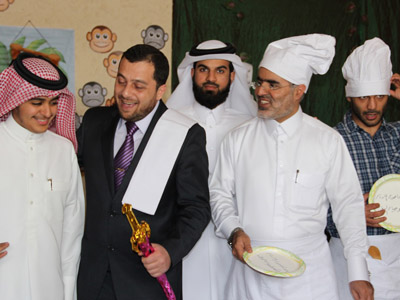 The Race of Revision

The training summarized by: reading a question in order for the trainers to race to the wall for getting the right answer. 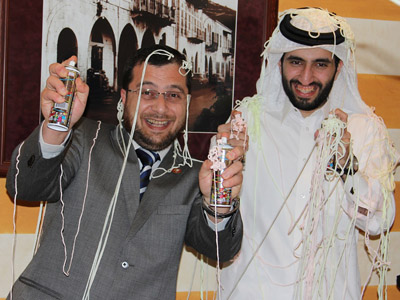 The activities of the course has been excellence for the frequent movement of the trainees… where the trainers rarely sat on their seats… and any visitor to the hall could clearly see the signs of joy and energy on trainees faces.

Tug of War and Learning Summit:

The travelers played to role of two countries that share the knowledge at “Top of Learning” each team receives search materials, and then negotiate for the information that the other party has. The procedures 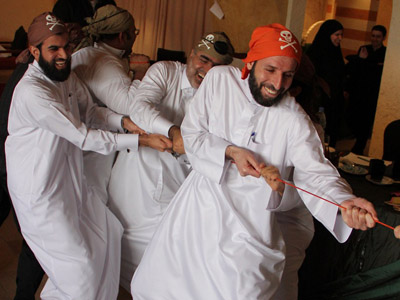 One of the two teams started requesting an answer for a question that the other team should look in it. And that team negotiates by giving an answer for an answer. This summit continued till all the answers were shared. 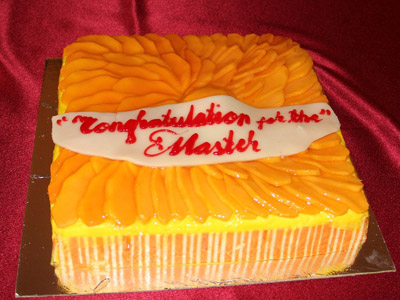 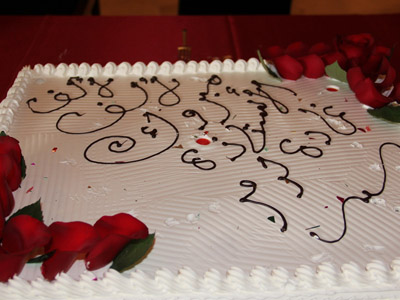 Just before three days of the end of the course, emerged news about Ghada Larum that she got her Master Degree, therefore, in this occasion, two parties had been there. One is organized by the troopers, and the other done by the team of ILLAFTRAIN- DOHA. What should be mentioned is that trainers Ghada Larum and Jawaher Al-Mane’ passed this course and got the license of teaching it. And this makes them the first two female trainers getting this license at the Arabian Gulf, therefore, Congratulations for both of them.

Some of what the explorer troopers said:

“The course is not just a normal training course, but it is a real changing course in mind and work. I do advise all of the people who are interested and uninterested in training to attend it and enjoy the time and change as I did.”

“The Certified ILLAF TRAIN Trainer Course is the key to the world of success and distinction.”

“It is a course that deserves to build and improve you… brings you back to your happy childhood through its funny trainings that are connected to education methods… don’t think twice: be here someday.”

“I’ve witnessed fun in every moment of the course which distinguished with the ease of instilling values.”

“The course is fun … fun … fun. I thank anyone who had made any effort even if it was simple to get me to this level which is more than great…”

“a rich course…I invite every person to join it, and I invite each trainer chasing perfection to join it for it is the real first step… so start with God’s blessing…”

“Don’t look for yourself… just enjoy and you’ll find yourself appearing before you… and after that, don’t just do nothing, but take it with you to move forward and to fly in the sky of creativity…”

“This course changed much in my life… honestly I recommend it for you… and my advice is “enjoy life”.