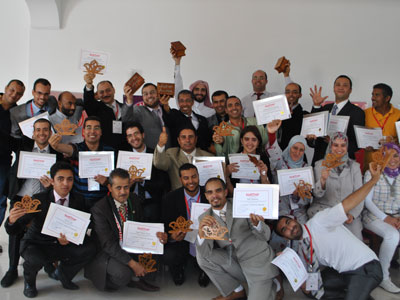 By the god almighty, the events of 27th training of trainers course has concluded on 11-9-2012 (certified ILLAFTrain trainer) at the blesance hotel in Meknas. The course continued for more than 100 hours at the rate of 12 hours daily under supervision of Dr. Mohammed Pedra, Hamza Aldosari from Qatar state and Abd Abdelouahab Boujmal and with the contribution of well known trainer

With respect to the activities, the course was full with creation and movements, but only we will cover Meknas Kitchen and tug of war.

Tug of war and the summit of learning:

The passengers performed the roles of two countries that share knowledge in a “summit of learning” where each team will receive subjects for research and then they will negotiate about the information which the other team has. Procedures:

One of the teams starts to give an answer for a question the other team should answer it. And this team aim to negotiate so that where he will give the answer instead of an answer for another question. The summit continued until all answers were shared between the teams.

The course activities characterized by the continued movements of the trainees so that it was rarely to see any one sitting on his chairs and any visitor to the hall can see happiness and activity signs on the trainees faces.